Just one week away from celebrating the second anniversary of arriving here, I had a rather unexpected set back. And while this is somewhat a departure from my usual blog post, I want to honor this un-looked for experience, part of my now two-year residence here at Lightspring Glen.

December 9th was an oddly mild day for this time of year and Angus-cat had been missing for most of it. The worry got to me by 3 o'clock. And with only an hour until it would get dark, I went out to look for him going first to check a favorite spot of his in the hayloft on the barn's upper floor. The photo shows just how far I managed to tug the heavy door open when I lost my balance and sailed as gracefully as I could to the ground, a good eight feet below. As soon as I knew I was going to fall I did my best to go limp, a quick recall from long-ago horseback riding days. The more relaxed you can be when you hit the ground helps to minimize the impact.

I landed sprawled heavily on my right side and for a long moment lay stunned gazing at the gray sky and the barn above me. It was the weirdest sense of disorientation lying there looking up at the world. Flattened. I felt strangely compelled to yell loudly several times, a sort of guttural outburst, half mad at myself, half just to register my distress. That done, I took some deep breaths and began to carefully assess what parts of me were working okay and not hurting. Actually nothing hurt for a while, the likely effect of shock. I sat up cautiously...no dizziness...then managed to carefully stand up and lean against the barn keeping all the weight on my left leg. Immediately I knew that something was really wrong with my right hip and leg and that walking was not possible.

I lowered myself back to the ground. With absolutely no one around, my neighbors away, I needed to do something. (And no Angus appearing to offer sympathy....good thing he didn't show up just then!) I determined to try crawling gingerly towards the house, a sort of slow-motion crab-scuttle that got me to the backdoor steps and inside in about fifteen minutes. I was pretty exhausted but able to boost myself into a kitchen chair and reach the phone to first call my daughter and then 911.

With my daughter for company on the phone, I waited patiently for the ambulance to arrive still blessedly feeling no pain. It is my absolute belief that there are no accidents and even this literal one was going to be bringing lessons and gifts. The first gift was the welcome appearance of the four fabulous EMTs, all Sidney Center neighbors. They came into the kitchen with their warm smiles and calm reassurance that I'd be well tended to. My healing journey was underway.

It would stretch out to two months and more and is still not entirely complete as I come to write this at the end of February. There was such a flurry of medical care in those first 24 hours as I came under the care of a dozen and more nurses and doctors, nurse's aides, orderlies, and hospital staff at two hospitals. Because of the concern of possible internal trauma from my severe fall, I was transferred to the hospital in Cooperstown and was seen by both orthopedic and trauma doctors. I was grateful to every one for both their professional and warm-hearted care. So many commented that I was lucky to have not suffered worse injury than a fractured sacrum (tail bone) and minor pelvic fractures. Yes, I knew I'd been mightily blessed. And there were also lots of compliments for my general fitness that had also "helped". I very much liked hearing that too!

The next day I was released to my family's care and an incoming torrent of good wishes, prayers, and long-distance healing from friends near and far. My Facebook page hummed with dozens of messages of concern and loving thoughts. I knew my job at that point was just to lie back which of course I literally did for a while, and receive all those sweet and healing ministrations that at times left me teary with gratitude.

I'm still learning more about why this happened and will be for a while. Certainly an initial gift was receiving such loving attention and care from so many wonderful people, family and friends. Though there was considerable physical discomfort for a while, nearly from the first day I was and am grateful for this journey.

Lying there in those first moments, feeling the ground beneath me, there was a keen sense of being embraced by the Earth. These two wonderful years here at Lightspring Glen have brought many encounters with the marvelous non-human residents...and some of them were certainly present to offer help and comfort that afternoon. More on that in future musings.

For now, I offer Mary Oliver's poem to capture some of my unfolding understanding:

Sleeping in the Forest

I thought the earth remembered me,
she took me back so tenderly,
arranging her dark skirts, her pockets
full of lichens and seeds.
I slept as never before, a stone on the river bed,
nothing between me and the white fire of the stars
but my thoughts, and they floated light as moths
among the branches of the perfect trees.
All night I heard the small kingdoms
breathing around me, the insects,
and the birds who do their work in the darkness.
All night I rose and fell, as if in water,
grappling with a luminous doom. By morning
I had vanished at least a dozen times
into something better. 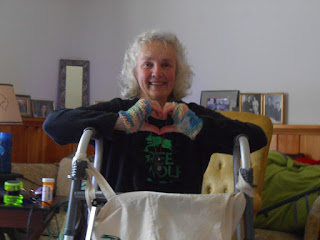 Post-script for you Cat-lovers:
Oh yes...Angus returned from his adventures the next morning,
no worse for wear! My son-in-law who let him back in the house
told him, "You are such a naughty boy...!!"

Posted by Carol Ohmart-Behan at 9:18 AM