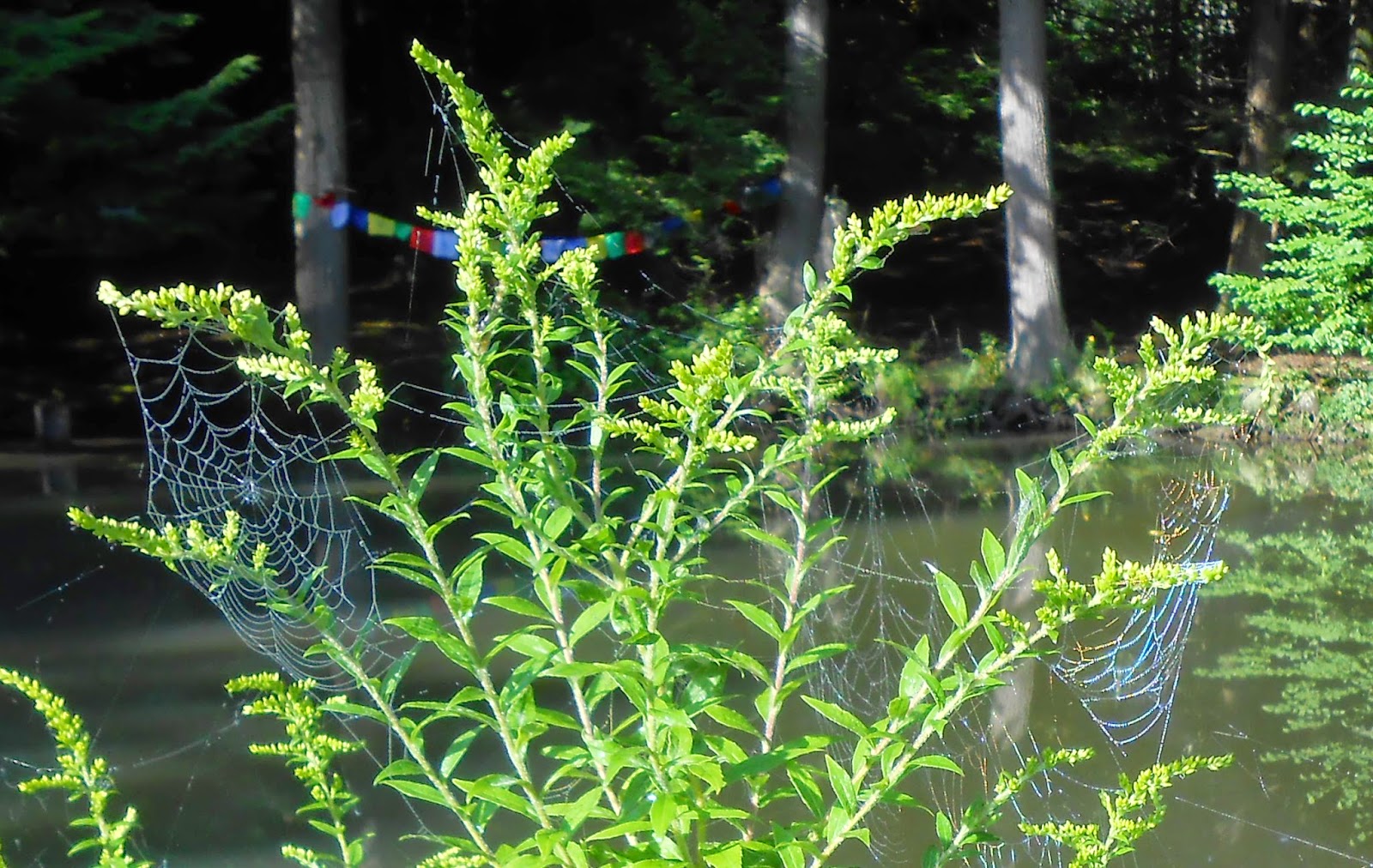 It is two days until the end of August and I am celebrating a special anniversary. Though I've lost track of the actual day, just a year ago I drove up to this place, seven acres of Paradise that opened wide its arms to receive me in. The Official Welcomer that day was a magnificent owl that my realtor-friend, Barb, and I startled from its day-time perch beside the waterfall. As the huge bird disappeared into the trees I only had time to exclaim, "Wow! A Red-tail Hawk!" But no, this winged resident was awaiting us in the pine grove and it took my breath away when Barb pointedly excitedly at it not twenty yards from us. "It wasn't a hawk...it's an owl!" The owl peered intently at us, tipping its head first to one side, then the other. Then, our measure taken, it flew off silently through the hemlocks, the sense of welcome zinging straight to my heart.

As I've shared in many of these Earth Pilgrim posts, so many other beautiful residents of these Catskill foothills have also crossed my path, each a privileged and often magical encounter. Only a week ago I was thrilled to the marrow by another amazing one. I was standing quietly at a special spot where I go to greet the day, and out of the corner of my eye saw a movement. Not thirty yards off through the hemlock grove a bobcat was padding silently through the woods, a squirrel hanging limply from its jaws. The rays of the morning sun played light and shadow patterns on the golden fur as s/he moved gracefully along. Yes, full of such grace. I stood stock still, mesmerized. S/he paused in an opening and turned to look intently at me, long seconds of a deep perceiving one another. "You're so beautiful," I whispered. Then, still unhurried, s/he turned and disappeared into the undergrowth.

Other treasures of this land are being offered in special abundance as harvest days arrive. For most of August the countryside has been lavishly arrayed in orange and yellow Jewel Weed, the white doilies of Queen Anne's Lace, the magenta plumes of Queen of the Meadow, and the multi-hued shades of Goldenrod. And as the expression goes, "I could go on"! A foggy morning of a few days ago created the ultimate accenting bling for these riotous wildflower bouquets. The rising mists be-jeweled the spider webs strewn all along the pond's edge. Their dazzling allure refused to release me for quite a while. But truly, to borrow Mary Oliver's line in The Summer Day, "Tell me, what else should I have done?"  The answer is obvious. Mary Oliver trusts in her readers' easy understanding as do I of you. I hope you can see my grin!

The treasures of this first year at Lightspring Glen are at times almost beyond measure. But I, this often blissed-out Earth Pilgrim, am only too happy and thoroughly delighted to continue to pass them out in heaping handfuls. En-Joy!
Posted by Carol Ohmart-Behan at 8:30 AM No comments: