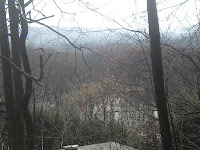 1st day of Spring, 2012...view of the Susquehanna from Dragonfly Cottage

{A poem written inspired by another Spring, once upon a time...}