This is a small story within a very large one of last September’s devastating flood that impacted not just my community here in New York’s Southern Tier, but far beyond. Though I have thought often of writing about it, it’s taken me literally a full year to find a way to say something meaningful in the face of such an overwhelming experience.

I moved to the outskirts of to the in April, 2008. By last year, 2011, I was starting to feel quite settled in and a part of the area, especially of my neighborhood here near Round Top Hill with its beautiful small park overlooking the . In the first week of September when it was clear we were in the direct path of Tropical Storm Lee, the area braced for the flood that would follow. There’d been a harrowing one in 2006, what people called a 100-year flood. Having survived and come back from that one, the Southern Tier felt ready to handle this one too.

The rains began to fall in earnest in the late afternoon of September 7th. That night when I turned off the light to try to sleep, I could scarcely believe how heavily it was falling: an onslaught, a deluge, a sound unlike anything I’d ever experienced. Around 3 am I was awoken by sirens and flickering lights. I could hear amplified voices announcing the neighborhood was under a mandatory evacuation. Police were going door to door with information about the emergency shelters.

I hurriedly threw some things into a bag and overfilled my cat’s food dish while he looked on totally bewildered. I told him I’d be back but didn’t know when, and drove off into the heavy rain, just one of the 30,000 evacuees in that dark night, heading for shelter and high ground against the swiftly rising waters of the .  Making my way out of the neighborhood I at least knew that our street, high above the river on Round Top Hill, would not flood. Neighbors down nearer the flood wall could not be assured of this.

Lee’s 8.98 inches of rain came just eight days after Hurricane Irene’s devastating visit to on August 29th and proved well beyond the watershed’s carrying capacity. When the Susquehanna peaked below our hill that afternoon it was 38 feet above flood stage. By then, with power and water miraculously still on on my street, I came home.

Over the next several days I witnessed extraordinary events, both Nature’s and of my human community. After Lee sailed off into , the skies cleared to warm and sunny weather. The moon was just a few days from being full. With the power grid down nearly everywhere, once night arrived the suburban landscape was nearly completely dark, lit only by moon light. Many roads were closed including busy State Route 17 just across the river, its incessant traffic-hum stilled. That first night I stood at my upstairs window looking out on this eerily beautiful scene, the sound of the river’s powerful current swooshing and clattering high through the trees along its wooded banks. I will never forget this surreal landscape bathed in the moon’s glow.

Right from the first night, people reached out to help each other in gestures large and small. It is well beyond the scope of this blog post to tell much, but what I did witness on the second day I hope will capture some meaningful part of it, another small story in the mammoth one of the flood and its aftermath.

Only a few blocks away from me, despite the flood walls, water rose into the first floors of many homes. Many streets were impassable. The morning after the river crested, a Saturday, I walked down through the neighborhood, camera in hand, trying to capture some of the not-to-be-believed sights. I came to a corner and saw several people standing at the edge of the water mid-way down the sloping street. (click on any photo to see as a larger size) 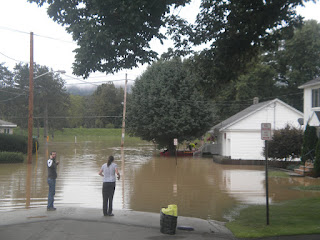 When I joined them they told me that a small dog had been left behind when the elderly owner had been evacuated. Her home was now unreachable and the neighbor who’d pledged to care for the dog was quite distraught. Then came the sound of an engine and a small boat came into view with two men from the sheriff’s department. They were going to each flooded house checking for anyone who might need help.

Our little group had grown to about a dozen people and we called out to them about the dog. Among us was a couple with whom the woman was staying. They’d driven over hoping to reach the dog and said how she was “worried sick” about her pet.

The men maneuvered their boat to the porch, lifted a pet carrier from the bottom of the boat, and went inside. We all waited anxiously, eyes on the door. In just a few short minutes they emerged beaming and gave us thumbs up, the dog secured in the crate. Everyone cheered and hugged each other as the boat made its way towards us. More cheers when one of the men was able to step out and carry the crate to dry land. 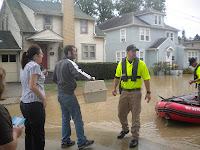 By then many of us were in tears, especially so when the young man opened the crate’s door and scooped up the shivering little dog, hugging it against his chest. 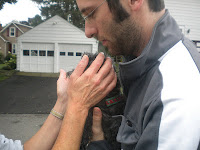 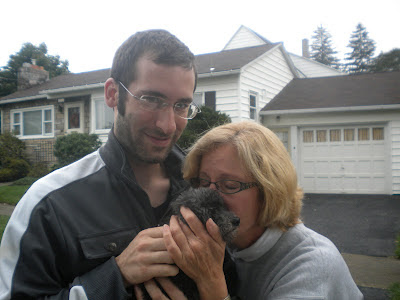 More hugs for the dog’s rescuer and more hugs all around. We were no longer strangers, but uniquely connected in this sweet moment of shared humanity and community.

It has been a long year of slow recovery and rebuilding for all the communities affected by the September 2011 flood. There's more needed and more to come for many people.  2012’s unusually dry and hot summer has felt at times as a surreal opposite to the days of Hurricane Irene and Tropical Storm Lee. The deeper story of climate change is lurking in the background, I know without a doubt. But that is a story that must wait.

Just yesterday as I was working on this post, I went out to do some errands and drove past the Take-a-Break Diner which had been closed and under repair all this time. On Sunday, exactly one year after the flood, they opened their doors once more. As I passed by yesterday, four cars were parked in front. The “Open” sign winked at me. And I made plans to stop in soon and celebrate Take-a-Break’s return.

Posted by Carol Ohmart-Behan at 9:21 AM No comments: