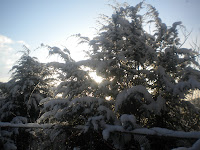 Well, December 2012 slipped past bringing with it the end of the world...year.  My intention of capping off Earth Pilgrim's year with a thoughtful post proved to be so much wishful thinking. Not likely many readers of this blog, regular or occasional, took note, but I do feel a bit of a slacker anyway! Following its launch two years ago this month in a post titled, "Pushing Off from Shore", I find myself  reasonably pleased with what I've offered in words and photos along the way.

The second post of that January, "Standing at the Cave Door", featured reflections on the rugged winter underway in the Northeast in 2011 with shoveling out the bird feeders a frequent chore. But of course we all managed and spring and summer followed as the Wheel of the Year slowly carried us along.

By February of last year I was lamenting winter's tardy arrival and hoping for late season snows to cheer those of us who sincerely enjoy Mother Nature's winter offerings. One of my goals was to be able to make at least one snow angel. Such was not to be, and apart from the possible plus of lower heating bills, a real price paid was one of the worst flea and tick seasons I can remember! Angus-cat fortunately put up with the three flea baths I subjected him to.

2012 brought us other weather-weirdness, the most dramatic being Hurricane Sandy's devastating visit to the East Coast. My community which had endured terrible flooding a year earlier from back-to-back tropical storms, braced for Sandy's impact and felt hugely relieved to suffer mostly wind damage this time. The reality of climate change and its sobering impact is at last becoming a widely discussed topic. And that it merited pointed comment in President Obama's inaugural address this week makes me especially Hope-full.

This year has seen a marvelous turnaround when snow arrived early in December bringing us a perfectly beautiful white Christmas, very Currier & Ives. Nearly everyone I met spoke with the same enthusiasm of how much they were enjoying the snow. Driving challenges aside (that's just part of living here, most would tell you!), there's been a surge of snowman-making and great hope on my part for soon-to-be snow angels. Last week's thaw melted much of December's snow pack followed by this week's deep freeze of zero-degree nights. This brought to mind the old-time phrase of how many dogs to invite onto the bed to help keep you cozy on frigid winter nights. Three sounds like a lot to me, but one black cat has been quite welcome here.

A light snowfall is predicted for tonight just in time for the weekend's Full Moon. There is nothing quite as beautiful as snow glistening in a winter woods on a moon-bright night.

More seasonal-commentary to follow no doubt. Happy Winter, everyone!
And Happy 2013!!
Posted by Carol Ohmart-Behan at 12:49 PM No comments: