Two months along in my residence at Lightspring Glen and I still feel more like an honored guest than the mortgage-holder that the Bank says I am. I think this is because it still seems too good to be true to even be here, to have returned at last to my rural roots after five years "in town". As friendly as people were in my suburban neighborhood, and as wonderful as my riverside cottage was, at times it still felt like living in exile from Nature's ready presence in woods and field. I didn't realize how hungry I'd grown to live an elemental, Earth-anchored life again.

Previous posts relate my arrival shortly before Winter Solstice so it's been a pared down and snowy landscape I look out upon each morning. And it's been a challenging Season of deep snows and many days of bitter cold for my wild neighbors. My only help is stocking the bird feeders and wishing all well from behind my thermo-paned windows. Many days my only out-of-doors time is just  that short walk to the feeders and then hurrying back inside rubbing my cold hands together. It still feels a long way off before I can start my woods-exploring and see to rescuing the overgrown flower border. I'm trying not to be too impatient.

Last week brought a brief thaw and a few blessedly warmer days, even rain showers. Driveways at last were freed of their ice and how good it was to go around with lighter coats and jackets. South-facing fields lost some of their snow opening grazing places for the deer. A few days before this warm-up I arrived home as evening was settling in. When I got out of the car, a sound I'd been waiting and hoping for echoed clearly through the dusk. The unmistakable call of a Great-horned owl thrilled me to my toes and I went quickly to the garage's back door, hoping it would call again. Yes! "Who....hoo....hooooo....." spoke the owl and from quite nearby in the hemlocks. "Oh-h-h....." I whispered, shivering in delight. And then another owl answered from the woods across the road! I stood transfixed, eavesdropping on their conversation for as long as I could stand the cold and then retreated reluctantly indoors.

So mating season has begun for these beautiful birds who never let a little cold and snow bother them when it comes to this. On a drive yesterday I cheered to see robins along the road in the bushes, managing despite the gusty winds and blowing snow. And robin-reports are popping up on Facebook (our 21st-century's telegraph), each one greeted with comments of delight and a certain relief. Take heart, the robins are telling us. We are all one day closer to Spring.

Posted by Carol Ohmart-Behan at 7:01 AM No comments:

Email ThisBlogThis!Share to TwitterShare to FacebookShare to Pinterest
Labels: Lightspring Glen, Wheel of the Year 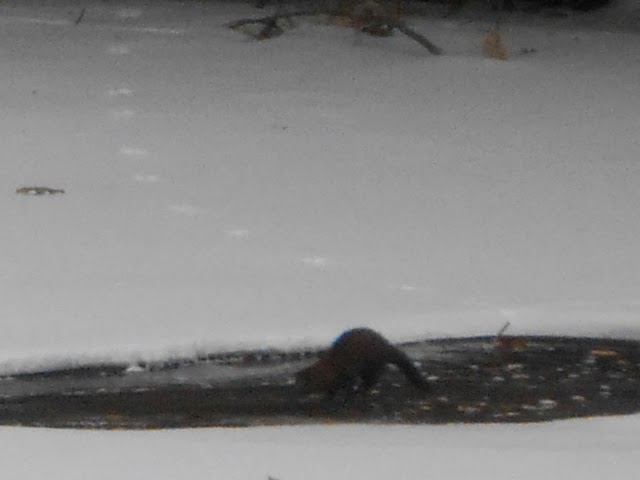 This admittedly fuzzy photo is the closest I've come to capturing an image of my sleek neighbor whose story I shared in the previous post. You can see her back arched as she readies to dive back into the open water. Once on a walk along the Susquehanna River when I lived at Dragonfly Cottage, I saw one swimming and watched from my hidden viewing spot as s/he climbed out on the bank for a minute or so and then dove back into the water. Not long after this delightful encounter, I chanced upon this wonderful poem of Mary Oliver's of her own interaction with one of these marvelous creatures! I know it will bring a smile and just possibly a chuckle at the end, most especially if you're as much of an Otter Lover as Mary Oliver and me. Enjoy!


Almost a Conversation
Mary Oliver
I have not really, not yet, talked with otter
about his life.

He has so many teeth, he has trouble
with vowels.

Wherefore our understanding
is all body expression —

he swims like the sleekest fish,
he dives and exhales and lifts a trail of bubbles.
Little by little he trusts my eyes
and my curious body sitting on the shore.

Sometimes he comes close.
I admire his whiskers
and his dark fur which I would rather die than wear.

He has no words, still what he tells about his life
is clear.
He does not own a computer.
He imagines the river will last forever.

He does not envy the dry house I live in.
He does not wonder who or what it is that I worship.
He wonders, morning after morning, that the river
is so cold and fresh and alive, and still
I don’t jump in.
Posted by Carol Ohmart-Behan at 8:59 AM No comments:

Prior to my arrival in mid-December, for nine years this place was the seasonal home of a Long Island family. So a good deal of the time the yard and woods were the mostly undisturbed home of the wild ones. After the astonishing greeting on my very first visit by a huge owl  (a tale deserving a separate post!), I looked forward to getting acquainted with the other non-human neighbors. It was, after all, their backyard that my small house occupied.

There certainly were deer. Their tracks in the snow showed how busy the place was after dark. During the daytime I caught glimpses of two or three in the woods beyond the pond. Once I put up the bird feeders I saw evidence of their investigating what was left on the ground at the end of the day. It's been a very snowy winter, so I don't mind at all their being the after-dark clean-up crew. Then to my utter delight, very late one afternoon this young one strolled confidently around the corner of the house and began munching away, the mourning doves not a bit bothered by their four-legged competition. When I told my across-the-road neighbor about this he replied with a smile that one of the deer...likely this one...sometimes comes right onto their front porch for bird seed. (click on photos to see each one larger)

A lifelong "bird-er", I was especially eager to find out what birds make this their home. So far the feeders have attracted chickadees (about my favorites), a pair of cardinals, a blue jay gang, a lone junco, gold finches, mourning doves, titmice, and a half-dozen or so tree sparrows who are winter visitors from the Canadian tundra. I've not seen the owl again but am hopeful he or she is still in the neighborhood. Its immense size indicated I was likely welcomed that day by a Great-horned owl. Mating season begins for them soon, so I'm anticipating the thrill of hearing their who-whoo-ing songs on a moonlit night. There are crows of course, passing by all the time on crow-business. Their raven cousins prefer less-civilized areas, and I've been delighted to hear their gravelly voices calling back in the hills and catch glimpses of them on the wing. Last week one perched in a tree by the pond allowing me a good look at its handsome profile, croaked a message, and off s/he went.

I would have been enchanted enough with all of these, but another magical encounter awaited. Lightspring Glen's seven acres encompass two small ponds, three streams, a waterfall, and several springs above the upper pond. One frigid January day I just happened to be looking out at the pond when I spotted a small animal dashing along the farther edge. Odd that a squirrel's out on a sub-zero day, I thought. Fortunately my gaze lingered since it came into clearer view and I gasped to be see it was an otter! I was so thrilled and a day or two later found its tracks on the ponds' ice, so clearly she/he/they lived nearby. As the cold deepened, the pond froze over nearly completely except for a center spot where the streams' incoming currents keep it open. And then a second fortunate sighting of the otter going in and out of this open water catching small fish, and this time s/he was there for nearly fifteen minutes. I couldn't resist the urge to try for a picture and went out to the garage door with my camera. Angus tagged along and when he caught sight of this creature bounding along on the ice, he dashed down to the pond for a closer look. The otter spotted Angus and clearly was also curious about this "unusual" creature. I captured a moment of their staring at each other across the ice.
Angus got up his nerve to pad across the ice to the open water (me praying he wouldn't fall in)...the otter dove in, popped up at a small opening near the waterfall, and dashed to its burrow. So they've taken each others measure, and who knows, maybe next time they'll touch noses.

Bears? If they're here, they're hibernating soundly (and wisely) through this old-fashioned winter's cold and snow. So I'll just have to wait and see what Spring brings. But my sense is that more intriguing encounters are in store for Angus and me. Oh my! :-)

Posted by Carol Ohmart-Behan at 7:21 AM 2 comments: