Six weeks ago I was one of those stunned to tears by the incredible news that Gov. Cuomo had okayed a ban on hydrofracking here in New York State. Time and again when I talk with other Fracktavists about when and where they heard the news, they tell me that they also wept. In the photo above, look for the woman in the purple jacket....that's Sandra Steingraber. She's kneeling beside a gentleman whose name I don't know but who is from Dimock, PA.....I've seen him often at these gatherings as he's supported us in New York all these years. If Dimock doesn't ring a bell for you, please google it.

Sandra lives not far from me outside of Ithaca. She is an ecologist, environmentalist, and a firebrand in our movement...to many the Rachel Carson of our times. At the celebration rally last week, she spoke movingly of how we did this. Her speech is linked below and I hope you'll read it. It's not my purpose to attempt to sum up her words, but just this morning I came across this op-ed piece in the Binghamton Press-Sun that she co-wrote with Cornell Professor-Emeritus, Tony Ingraffea: http://www.pressconnects.com/story/opinion/readers/2015/01/22/science-courage-behind-high-volume-fracking-ban/22193583/

The last paragraph offers an eloquent summary of the road to this victory:  "New York now serves as a shining example for the rest of the country to follow. Independent scientists and health experts showed the importance of sharing our expertise with the public at large and urging that policy follow the science and put public health first. Citizens organized and built an unprecedented grassroots movement, a model for effectively making their voices heard and standing up to the oil and gas industry. And most importantly, [Gov.] Cuomo set a soaring standard by considering the health impacts and listening to the science, and having the courage to follow the science and do the right thing."

It was important to come together and celebrate, and yes, convince each other that these six years and more of often exhausting effort had resulted in Gov. Cuomo's decision. After my first stunned and joyful reaction, what I strongly feel is that this action...the banning of fracking in New York State...has shifted the paradigm, and will free us much sooner from the mindless, slavish devotion to fossil fuels to embracing the full promise of renewable energy.

Just as the work to ban fracking took all this effort (and undying hope), so much remains to be done, and it will be a hard road. Over and over again at the rally the pledge made was to get to work to help our neighbors in Pennsylvania free themselves and their beautiful land from this terrible scourge that has wreaked so much damage. I've been to Dimock, and I know. Here in New York, there is the threat to this immediate area and beautiful Lightspring Glen, of the proposed construction of the Constitution Pipeline, part of the dangerous infrastructure that would support the gas and oil industry in Pennsylvania.

Standing with all my Fracktavist brothers and sisters in Albany last week, we knew it was a short rest, but oh what a fine and joyful one. The spark of our hope that has now burst into flame is the firebrand that lights the way and will be passed along and passed along. 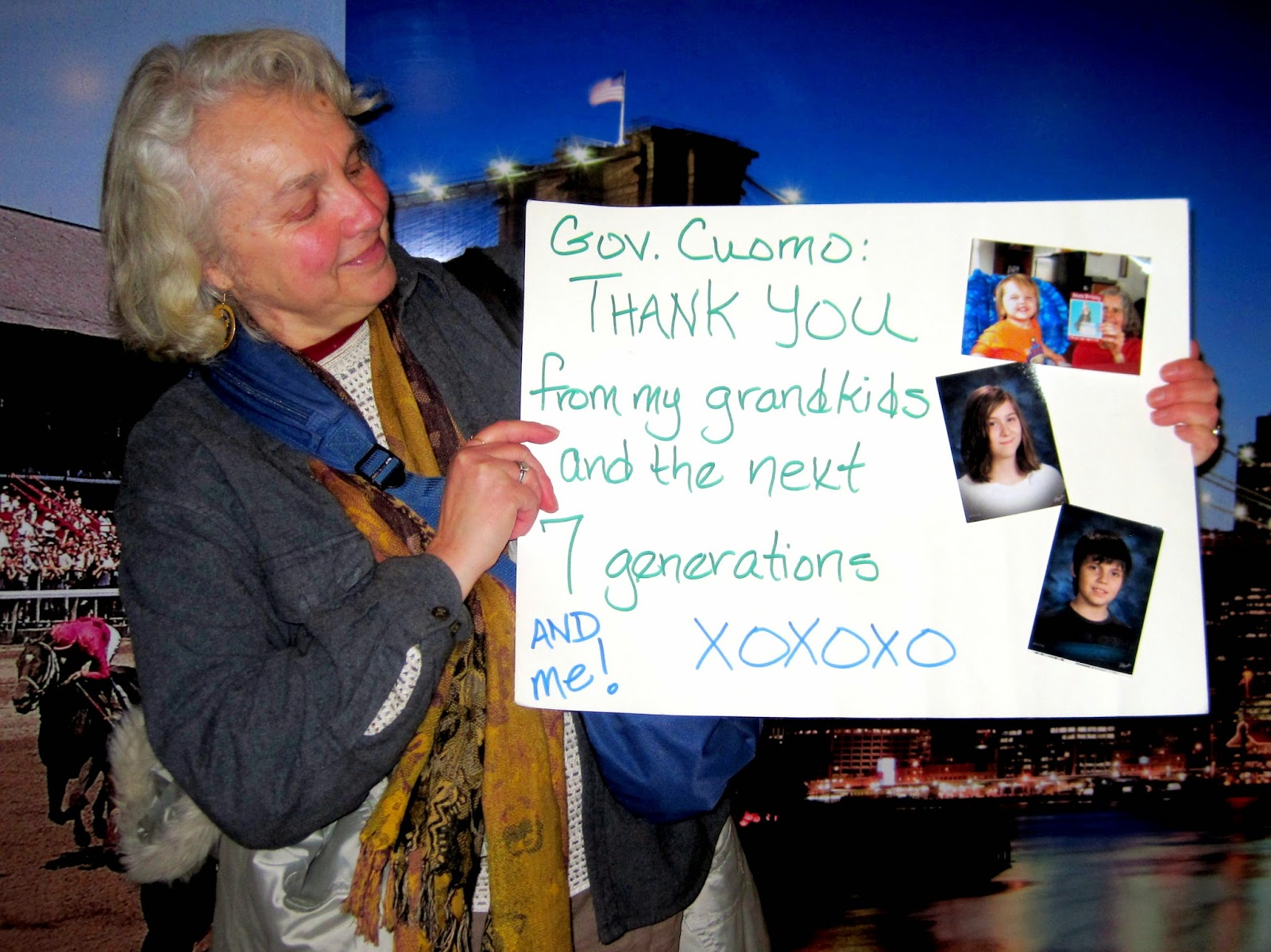 Posted by Carol Ohmart-Behan at 8:59 AM No comments: