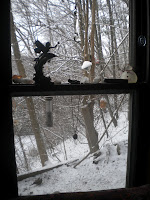 Yesterday morning, a mid-February Sunday, my window framed a somewhat rare view of a snowy Round Top Hill. A Mourning Dove poked about seeking handouts after a starry, 15-degree night. For nearly all of the day it felt like "real Winter." What a strange season this has been as is true for nearly all reading this. Since putting up my bird feeders "late", right after New Year's,  I've had the usual visitors but not in sizable numbers....some warm days it's been a quiet scene outside the window. I've pulled on my boots maybe twice. And snowy driving conditions have played no hampering factor in getting about either.

For quite some time it's been the sense of awaiting Winter's arrival, like an expected visitor due at a certain time who has yet to show up. You tend to start worrying about what's possibly befallen this tardy one.

My lifelong residence in the Northeast has me hard-wired to the annual cycle of four distinct seasons and the delights each bring. By this time of year, as rugged as the Winter might be proving, there's such reassurance and satisfaction in the lengthening daylight and the first signs of Spring approaching. We're now past Winter's mid-point and this subtle rhythm that moves the days forward has been weirdly off-beat.

I've passed the point of being mollified as many are by lower heating bills whether for households or municipalities' road-care budgets. It's definitely hard not to fret what this too-mild Winter might mean, the foreboding sense of Global Warming looming large.  The last time I was at our local Agway buying sunflower seed, I heard the cashier saying just that to a customer: "Let's hope this wakes people up to the fact that global warming is really a problem we've got to deal with." Her comment came right after I'd noticed that the woman in line ahead of me was wearing summer sandals without any socks....sheesh.

For now I'm taking consolation in the fact that many a Winter has seen the most severe weather coming in February and March. There's the folk-saying, "When the days grow longer, the cold gets stronger."  Perhaps Winter, clearly "alive and well" over in Europe where they're having one of the harshest winters in 30 years, will pay us an overdue visit any day now and linger into May.....it's done this before. And then perhaps I'll come to complain about it overstaying its time. If so, I'll write another post to that effect...happily, I can tell you.

What I can report is that when I went out for a walk along the river yesterday afternoon, a snow flurry descended with biting winds and swirling curtains of snow. I strode along, my cheeks stinging from the cold, loving every bit of it!
(click on either photo for a larger view) 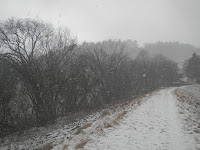