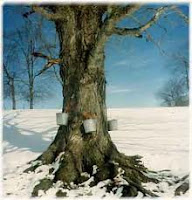 After months of frigid winter weather, today's splendid sun and mid-50s warmth is bringing smiles to everyone here. Spring suddenly seems more than a distant vision. Maple syrup producers are squinting at the sun in delight, laying out the sap-lines and considering how soon they can tap the trees in the sugar bush.

A week ago we had one of the coldest mornings of the winter, -15F. at my home. By midday word had reached me of the triumph of the Egyptian protesters in Tahrir Square, and all afternoon I sat glued to the television, mesmerized by the scenes from Cairo of jubilant Egyptians celebrating the end of Hosni Mubarak's 30-year autocratic rule. Eighteen days of peaceful, persistent demonstrations by mostly youthful protesters had resulted in an outcome that some considered impossible at best, daunting at the least.

How this all has happened in such lightning speed is astounding and extraordinary. When I first began to hear reports from Tunisia of the Jasmine Revolution, I reflected on my own vivid memories of the anti-war and civil rights protests of the 1960s. Then too idealistic and brave young people put themselves on the line to push for change in the same doggedly determined, non-violent ways. And yes, though it took long years, we too achieved extraordinary change.

Fast-forward to the second decade of the 21st Century: marvelous technological resources (Facebook!)fuel these fires this time around. And it was a Facebook post last month of a YouTube video that assured me that this thirst for freedom would not be denied:

It is not without cost or further struggle. That we all know. The protesters surely know. But there simply is no denying this patient, persistent force at its wonderful work. No matter how dark or deep the cold of winter days, daylight slowly but steadily increases, the maples stir awake, and their sweet sap begins to rise. The Earth gently careens Her way towards the season of green-renewal.

This year, like no other I can recall, the fulfillment of this promise overflows with golden light.