Standing at the Cave Door 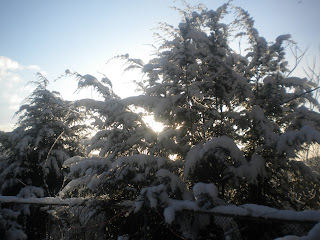 I was delightfully rewarded for rising early this winter's morning by the sight of the waning crescent Moon just a hand-span away from glittering Venus. Further to the East, pale light was already suffusing the sky at just past 6:30 am. It does lift my spirits to see the day stretching out at either end by nearly a half hour's-worth of daylight already, just a month past the Winter's Solstice.

Heaven knows, nearly the entire population of the East Coast needs this sort of encouragement that this rugged winter is not going to last forever (but then my birth-month, April, was called "the cruelest month" by the poet, T.S. Eliot  ::::shiver:::: )

With Christmas trees taken down and outdoor lights unstrung, January can take on a depressingly gray and somber cast. (Though here on my street, my neighbor and I are still firing up our modest "displays" each evening--his a white-spiral Christmas tree--mine a grape-vine wreath circled in multi-hued LED bulbs. Maybe we're in competition to see who will outlast who?!)  There's still so much dark, so much bitter cold to endure. Weeks and weeks....months of it. Character-building, some would say. Yankee-character has at least some of its roots in this long season.  I'd think of it that way in the years when teaching duties called which meant rising in the cold and dark, often with the driveway needing to be shoveled out before setting off on wintry roads, fingers crossed that I'd make it up Dye Hill without sliding into the ditch (Our school superintendent didn't much believe in snow days!) Ah yes, days like this were character-building indeed.

But somewhere not too far from where I sit typing, a black bear stirs in its den and blinks sleepily at the light growing outside. No rush yet, he knows, settling more comfortably before snoozing once again, snug in his winter retreat.

And in four days time arrives the ancient celebration of Imbolc, a day honoring the Celtic goddess Brigit or Bride, later Christian-ized as St. Bridget and the day called Candlemas Day. Regardless of which, Brigid the Light-Bearer overlights both celebrations. I regard myself on familiar terms with Brigid, "the bright arrow", fire goddess that she is. This year I've learned a new custom of honoring her, and so will be tying strips of white cloth on the bushes near the bird feeders, soliciting her blessings of abundance for the still-emerging year.

Doing a bit of research for Imbolc and its place in the Celtic calendar, this poetic description caught my writer's eye:

But  although this season was so cold and drear,
small but sturdy signs of new life began to appear:
Lambs were born and soft rain brought new grass.
Ravens begin to build their nests
and larks were said to sing with a clearer voice.

The British Isles are a bit ahead of us, true, but even here seeds are stirring in the darkness. And the maple trees are feeling their root hairs ever so delicately starting to tingle.

Pushing Off from Shore 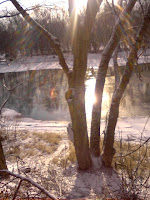 After what have been months of contemplation in starting this blog, I'm borrowing opening words from a man whose life journey has inspired me ever since his book, Anam Cara, dropped into my hands long ago in a Barnes & Noble aisle. Some will know the name without my writing it....John O'Donohue. This is how he begins his book:
"It is strange to be here.
The Mystery never leaves you alone."
Perhaps because of my Celtic roots, these words hold particular power. I certainly know that as long as I can remember, the powerful Mystery that O'Donohue names has intrigued and enchanted me, and with whatever Grace my life is blessed, may it always be so. Maybe, if not likely, my being Aries-born predisposes me to the delicious enjoyment of exploring this Mystery, to being drawn to embracing adventures that present themselves to me along the way....and by this decade of my life, my sixth, there have been a goodly number!
And at the top of the second page of Anam Cara, this: "Humans are new here. Above us, the galaxies dance out toward infinity. Under our feet is the ancient earth. We are beautifully molded from clay. Yet the smallest stone is millions of years older than us. In your thoughts, the silent universe seeks echo."
A most memorable moment in my young life was the first Moon-landing. The truly breath-taking photos of Earth taken by the astronauts showed us our beautiful Home, deep blue of the Oceans, white masses of clouds, red-brown of the continents, this "Big Blue Marble" floating against the backdrop of the black and starry heavens, carrying us along in its timeless journey around the Sun. And I a present passenger upon its exquisite, glimmering surface.
Through much of the journey of my life I have kept records of my days in many a diary and journal. Arriving at this time and place where marvels of technology allow such things, I've been nudged to share some of my musings and observations with the "wider World"....with you. Perhaps you'll care to respond with your own comments and notes of your own Earth pilgrimage and I encourage you if that comes to mind. We are all sharing a marvelous journey here on this beautiful Earth. I'll admit to a bit of trepidation as I click the right buttons to "publish", but all journeys and adventures begin with a first step. So now, on the count of 3, I'm pushing off from Shore.....3....2....1......!!!