I'm re-blogging this post having found it compelling reading.
This may be something that happens more often here
on Notes of an Earth Pilgrim.

Suzanne Lie: The Children of Mother Earth – We Came for Gaia.

Things are really “hot”. All you can do now is hang on and wait. Of course, it
is an active wait, as we are in constant contact with the higher
frequencies of Light that seem to accelerate more and more each day.

Then suddenly, it appears that that the connection stops – then it is
on – then it is off. This experience is similar to a short circuit, or a
lamp that is not totally plugged into the wall.

As we “plugin” to our Multidimensional power, we discover that we can see
through the illusions of 3D. In fact, that which was so important to our
physical body reality is being transmuted into that which is
increasingly important in our Light Body reality.

Read more »
Posted by Carol Ohmart-Behan at 3:42 PM No comments: 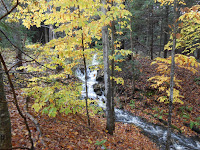 It's been a long pause between posts, though I've composed several in my mind since the Spring. Ah, yes, Life is what happens while you're busy making plans. But I make no serious complaint since it was such a delight-full time in between, this second Summer as the Resident Human of Lightspring Glen.

As much as I enjoyed the years of what I call my gypsy-life, how I love that these seven acres of woods and water have become my home-base. Two years ago on a golden September day, I set foot on this land for the first time. As earlier posts have mentioned, the Official Greeter was a marvelous owl who'd chosen a day-time perch at the top of the waterfall! After that encounter, I needed very little convincing that I'd found my home....or more accurately as I soon understood, my new home had found me.

This Summer now almost past I'm calling "The Summer of the Owls & the Hummingbirds" as they were both quite constant companions. A family of Barred owls nested somewhere up on one of the hills nearby and once the young ones fledged, I was frequently treated to their family conversations as they kept tabs on each another during the night. The fledglings in a decidedly treble voice called, "Who cooks for you?" - as the human interpretation has it - one or both of the parents quickly calling back in their baritone, "Who cooks for you? Who cooks for you-all?" How I loved waking up and hearing their voices echoing through the darkness. I'd often lie awake listening until they grew silent again. Another of their charms for me is that Barred owls can be heard now and then during the day. Beyond the special encounter of my first visit, I've not seen another one since. But I'm sure it's only a matter of time and patience. Note of that will be made in a future Earth Pilgrim post, I can assure you!

The hummingbirds were much about, especially as I invested in a feeder this year. I found one for just $3.00 at Dollar General. The clerk said he was having trouble keeping them in stock and it delighted me to think how many people around here were entertaining these feathered sprites. Last summer I frequently spotted them enjoying the red blossoms of the Kentucky Wonder pole beans in the veggie patch at the end of the yard. (photo below). Once I'd hung my $3 feeder on the porch, my first male hummer appeared within twenty minutes, his throat flashing its iridescent red. Ultimately I counted at least four adults, two pairs that routinely sparred with one another for prime sipping. They'd chatter at each other and often zoom in to spook whoever was trying to have a quiet drink. These aerial sparring matches were greatly entertaining, though I sometimes scolded them, "There's plenty for all of you...share!"  Mostly they were quite tolerant of my presence, and would occasionally perch just a few feet away on one of the house plants that live out on the porch for the warm months. Pure enchantment. It was like having winged fairies for company and I never grew tired of their appearances.

It's a much quieter place since their departure only a week or so ago for their winter range. The small golden bees who also competed for the sugar water had the feeder all to themselves for a few days before I noticed the hummers' absence and took it in. How it is these tiny birds find their way South just amazes me, another of the countless miracles of this Good Green Earth. The Barred owls aren't going anywhere, though I'm sure they spread out a bit from the nesting territory. Like me, they call this place Home. Accepting the lengthening hours of darkness is a bit easier knowing their familiar calls will continue to drift my way from the woods.

As I was typing the first part of this post, the window open to the warm morning, an owl called somewhere on the hillside across the road, just a brief day-time comment, but duly noted and enjoyed by this fortunate Human-in-Residence here at Lightspring Glen. 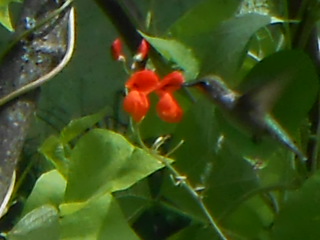