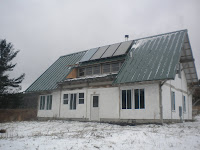 As promised, here are a few more words and stories to round out this quite marvelous tale. A month of "good living" has taken place now under the green metal roof, and the residents, two people, two dogs, and two cats, seem in complete agreement that it's bordering on Bliss! (Next time I'm there I'll try getting them all to pose for a group photo) The four solar panels are ticking and gurgling beautifully right along, and the gorgeous "super" Full Moon of March 27th and 28th flooded the interior with its Lunar blessing.

[Actually the latest report is that a bluebird, newly returned from the South, showed up a few days ago not far from the front door...and it's my hunch that she or he arrived straight from "happiness-land"....trusting you know that expression :-) ] 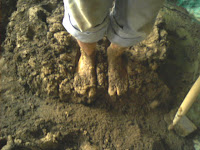 When this ambitious project of Tracy and Justin's was launched, I knew I'd definitely enjoy being a part of it, but the incredible delight of helping "raise a house" far far exceeded my early estimation.

I wouldn't want to gloss over the

I know that all four of us parents, Children of the '60s "with flowers in our hair" (well, at least I put some in my hair!) set out in our young adulthoods to help make a difference in a pretty-battered world. Living lightly on the Earth was an early tenet taught to our children upon their arrival on the planet in the mid-'70s. Speaking then at least for myself, watching and helping Tracy and Justin's straw bale house grow from its dream-inception and emerge slowly from the earth at Sun Dog Farm, certainly has been watching a piece of my hopes and dreams blossom as well. 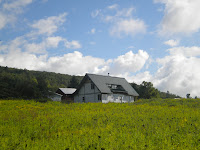 Justin and Tracy, heartfelt congratulations, with much love from Mom/Carol. And sharing the message again from 98-years-young Dottie Carpenter, "May you have many years of wonderful happiness in your beautiful new Home."


Posted by Carol Ohmart-Behan at 9:28 AM No comments: 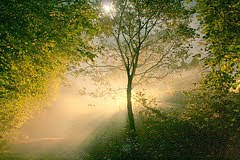 (a poem to welcome Spring)

Stars tangle in the night-black branches of the soft maple rising
impossibly high against the mellow night’s light-pricked ebony velvet—
Orion, leaping ahead of the winter-born Saggittarius, is now caught by early dark. In January’s bejeweled & frozen skies, the chase lasted until mid-night.

I sail off upon this star-current, trusting its familiar passage, following
night-flighted birds heading homeward…the Wheel lumbering us all along
with its gentle rounding-rhythm.

So we see the night through…
Birds alight to sleep…
I arise, summoned by quiet yet such insistent urgings…

Trees rise from mist-riddled bottom lands which resound and echo
with the calls of birds exulting
in the growing light & warmth of the year;
the Earth slowly spinning Her way into Spring.

We trust to growth, to life re-inventing itself…
to the oozing, leaf-mold muck yielding its verdant promises….sap-Rising.

I gather hands-full of Dawnlight spilling in through the living-room windows,
stirring and drawing up these hidden energy-currents,
hooking into this shifting, vital force
– tidal vibrance, as subtle, as constant as the waxing & waning of the Moon –
and as reliable,
despite the illusion of its silver crescent
to make us think the whole of its celestial body
has been consumed by a nameless darkness.

inspired by a journal entry
28th March, 1998
at Morningside
Posted by Carol Ohmart-Behan at 9:21 AM 1 comment:

Raising the Roof on Sun Dog Farm - Part One 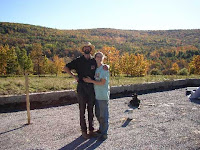 On a cloudy August morning in 2006, I stepped into the muddy trench dug around the rectangle of packed dirt, and helped my partner, Barb, set our first 50-pound block of our adult children's dream. We are half of the "AARP Crew" helping to lay the foundation blocks of my son, Justin, and daughter-in-law, Tracy's, straw bale house. The Crew is composed of their Baby Boomer parents, all of us eager to be a part of this eco-friendly, 21st century, house-raising. Ken and Chuck are the proud Dads.

Their desire to do as much of the construction with human labor (and much heart), to use natural and/or recycled materials, and have a good bit of fun along the way brought the AARP crew back day after day, year after year, and also dozens of friends coming for various house-building bees spread over four and a half years time. Living only a 30-mile drive away, Tracy's parents, Barb and Chuck, were devoted "day laborers" through all those many many months (and had the most fun as a result, I'm guessing).

On the day they at last moved in, February 20th, 2011, somewhat dazed as well as delighted that The Day had at last arrived, Justin stood with arms folded looking around at their home and observed that the whole thing was like birthing a child with all the attendant joys and anxieties. Oh, yes....

Attempting to choose a few favorite stories for one post is a tall order! An excellent set of photos and running commentary by Justin of the work through 2008 can be had by visiting this link: http://www.meadowmuse.com/sundog/index.html 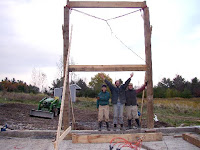 Certainly five of the most exciting days were the days each of the five, two-story tall "bents" were raised and secured. Justin's caption for this photo reads: "A tractor, 48 hours, and eight people later, we got to this point. Mike said he was sure the Amish would have been chuckling. First time we stood this up, my only thought was: 'My god, this is tall'". Just before dusk on December 28th of that year, the last bent gently "thunked" into place, and as we did each time that happened, as one we threw up our arms and yelled our delight. 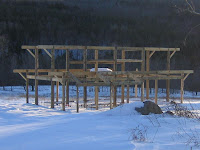 Other stories that come to mind: learning to hand-hew wooden pins, helping to unload half of the 80-pound straw bales one late summer day (my arms were jelly that night), pushing heavy wheel-barrow loads of plaster about, mixing the cob for the natural floor with my bare feet, and having my breath taken away each time I'd arrive and see what wonders had been accomplished since my last visit.

As the sense of the floor plan began to emerge, Barb and I would stand beside the future window seat and conjure up a picture of sitting there together with our first cup of tea. And, lo, that day arrived: 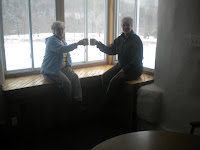 Do check back for more photos and descriptive tales and especially to see what this amazing house-of-straw looks like in February of 2011.